12 ways to increase employee engagement in the aviation industry

Your treatment of your airline staff is reciprocal — whether you like it or not, it will come back to you and have a major impact on your airline. Our innovative employee engagement strategies change the way managers inspire, motivate, and connect with their airline employees.

Mistakes that cause low employee engagement within the aviation industry

Ryanair, Europe's largest low-cost carrier, has come under fire in recent years after continuing strike action among its employees over working conditions and pay. In 2017, it axed flights for 400,000 passengers travelling between November 2017 and March 2018, less than two weeks after it cancelled up to 2,100 flights affecting about 315,000 flyers.

The action came after the airline "messed up" the allocation of annual leave as it shifts to a new holiday scheduling system. The Irish Airline Pilots' Association (IALPA) says Ryanair is struggling to cope with a high turnover rate among pilots as the airline expands its fleet, losing up to 700 pilots in 2016, their union claimed, with up to 140 going to one rival airline.

It is clear that this fiasco is opening the floodgates for pilots to demand better pay and working conditions. The Irish airline has also been criticized for using divide and control tactics to keep pilots on different kinds of contracts and to prevent them from organizing, resulting in the company being unable to replace pilots as fast as they are resigning.

Ryanair is currently recruiting new pilots to ensure sufficient staffing resources for future demand and will probably have to sweeten the deal to reduce pilot turnover, in particular countries where the package is less competitive.

Closer to home, in Canada, the Airline Division of the Canadian Union of Public Employees (CUPE) is urging airlines to step up and pay their flight attendants who are forced to work on the ground. Flight attendants are only typically paid for their time in the air, according to CUPE in a statement, and are not compensated during delays before take-off and after landing.

However, the situation with understaffed airports is forcing flight attendants to take on "critical work-related tasks" to ensure passenger safety, while also absorbing frustrations from passengers in cases of delay during the onboarding and deplaning processes.

The aviation industry is also feeling the effects of the widespread movement in which large numbers of people are leaving their jobs. Of particular concern in business aviation is the lure of airlines, many of which currently offer large signing bonuses and the promise of lengthy careers, as well as the potential for rapid advancement.

Pilots moving to airlines from business aviation believe they are getting in on the ground floor of a hiring frenzy. Despite the often-cyclical nature of the airline industry, pilots still believe they will be at the same airline for 20-30 years and then retire. It is difficult for business aviation to compete against that mindset, even if history shows airlines must often reorganize and furlough employees.

While “grass is greener on the other side” thinking will always play a role in workforce retention, with compensation among the top concerns, considerations beyond the office, hangar or flight deck often play a significant role in someone’s decision to stay or leave a job.

BI WORLDWIDE (BIW) Canada surveyed 1,000 Canadian employees and asked them “are you happy with your current job?”

Most employees either love their jobs or like them well enough to ably perform them week in and week out. In fact, the majority of employees are happy at work. 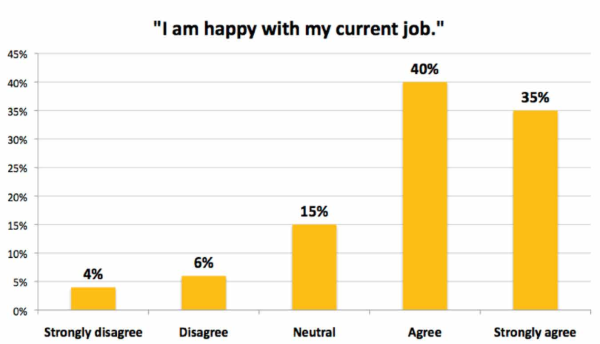 75% of employees agree with the statement to some degree. These new happiness numbers indicate that people are more connected with their work than commonly assumed. Happiness is hardly an impossible-to-attain aspiration for companies that pay attention to the needs of their employees.

Yet some consultants would dismiss the importance of these results because they consider employee happiness irrelevant, if not counterproductive. Some actively argue against happiness. However, the overlap between those who are happy and those who are engaged is so large that there simply are no appreciable numbers of people who are happy at work and not engaged, or, conversely, engaged and not happy.

We also asked the same number of Canadian employees.

What percentage of your full effort are you currently delivering at work?

The levels of employee engagement can be measured by their level of intensity to perform (i.e. how hard they work for customers and their active interest in improving the way they work) and by the level of commitment to their employer. 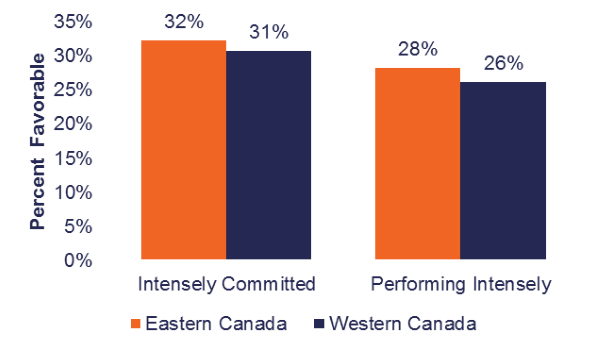 The leader’s role within the aviation industry

Airline employees who are recognized regularly work smarter and more effectively. They better understand what is expected of them and will work diligently to meet or exceed those expectations. As airlines have redeployed workforces and had to economize and reassess their business plans, many are more aware of their personal impact in driving business results.

Your best employees are eager to accomplish something incredible together. They want to be proud of the work they are doing. Challenge, rally, and support them wholeheartedly and you will be struck by what they can do. Those that have challenging goals are more than twice as inspired as those that do not and feel a greater sense of belonging at work. As a leader, you can help your employees clarify how they can achieve those goals.

For example, you might ask an aircraft maintenance technician:

Metrics and measurements should be focused on the goals and objectives in the employee engagement plan.

Is the ‘great resignation’ underway?

An Ipsos study revealed that 43% of Canadians plan to change their jobs in the coming year. Research conducted by Indeed suggests that 27% of Canadian employees are actively looking for new jobs and 47% reported they weren't actively searching, but said they were open to new opportunities today or in the future.

Right now, airlines across the globe are struggling with staff shortages both on the ground and in the air.

Why is this occurring?

Perhaps airlines are not keeping up with expectations on overall work-life experiences. We all have different priorities. There are those who might be motivated solely by money, while others might be motivated by the ability to be home for his/her kid’s ballgame, and others may prioritize growth opportunities.

At BIW Canada, we continually conduct research and benchmark studies to uncover the best ways to engage employees.

How to improve employee engagement in the aviation industry

Let’s explore 12 employee engagement strategies that can help you to strengthen engagement and organizational maturity for each of the New Rules of Engagement®.

While we have used the term Rules, let’s think of these as 12 attributes, employee engagement tactics, or perhaps best practice guidelines for a company or a leader.

More than ever, great leadership involves an intense appreciation of each unique individual—understanding each employee’s abilities, aspirations and how they work best. Success on this rule is critical to achieving all the others.

Money isn’t everything. It only gets you so far. Other areas such as belonging, learning and development, meaning and challenge consistently contribute more to the engagement equation. Yet, companies that mishandle the emotional aspects of money run the risk of over-amplifying compensation.

Money may attract airline employees to the front door, but something else must keep them from going out the back. A compensation system is foundational and needs to be in order, yet a paycheque isn’t among the top drivers of engagement for organizational differentiation.

Particularly in the face of uncertain times, the most successful companies will continue to look beyond the transactional nature of compensation and focus on a more effective and enduring strategy of identifying and operationalizing what the workforce values.

Never have work, personal life and health been so inextricably linked. Protecting employees' holistic well-being doesn't just reduce costs, it invigorates the employees and the business.

In lieu of permanent placements and pensions, employers are expected to provide growth opportunities. Offering opportunities for airline staff to be successful and reach their potential will grow your top talent … and your bottom line.

Employees cannot fully commit to a company without a sense of connectedness and belonging. Fostering belonging within an airline, within the team and with the work itself is critical for employee performance and enrichment.

Gone are the days of top-down leadership. The best ideas may come from employees, so listen with an open mind and use those ideas to shape the vision for the future and communicate openly with the organization.

People need to be part of something bigger than just a job and a paycheque. Meaning drives higher performance.

What people do today is largely motivated by where they think it will take them in the future. Organizations that are intentional about helping employees on the ground and in the air to chart their future will be rewarded with those people’s best work.

While the dynamics of the workplace may continue to shift, the mantra “recognize them when they do it well” remains a constant in the engagement equation. Simply put, what gets recognized gets repeated. Formally acknowledging and sharing contributions and accomplishments ensures behaviours will be multiplied.

People are usually willing to “take one for the team,” but only if they feel supported and valued. It is important to create conditions that foster strong collaboration.

True empowerment is not just a place to voice ideas, but also having those ideas seriously weighed and considered. It is not just being told to take a risk, but also being supported when the risk doesn’t go as planned. Empowering this way will ignite inspiration within the organization.

Your best people are itching to accomplish something incredible together. Challenge, rally and support your people and you will be struck by what they can do.

To learn more about how we can help your airline with your employee engagement strategy, we welcome you to get in touch at: canada@biworldwide.com.

We know how to engage employees.

One-third of new employees are already hunting for a different job within six months. To stem the tide of employee turnover, turn over your onboarding process. We’ll show you how.

Let’s build a recognition strategy that motivates, rewards, excites and drives the performance of your employees.

An employee value proposition (EVP) is the complete offering a company makes to its prospective and current employees in return for their best efforts. It encompasses pay and benefits, all the non-financial aspects that attract, retain, and motivate employees.

Your employer brand tells the story about who you are as a company. It’s also the secret sauce that helps you attract and retain great employees. We’re behind some of the world’s strongest and most distinctive employer brands.

The strongest leaders are magnets for the strongest employees. Give your leadership team the training they need to make the most impact.